#CatTravels: A day in Wellington It may seem odd that we had only planned to spend one full day in Wellington, the capital city of New Zealand.

But let me explain.

I had a hard enough time deciding which island to visit on this trip. Most people recommended South Island for us, where we could hike and fish and relax. But North Island had a lot going for it, too, namely wineries, surf and trout fishing in Lake Taupō.

It was a dilemma.

I had originally planned the trip to take us from Auckland (which we mostly skipped) down to Raglan, across to Taupō, down to Wellington just to catch the ferry to Picton, skipping Christchurch, down to Queenstown, maybe to Milford Sound and Stewart Island, then fly back to Auckland from Queenstown and back to Honolulu. All in nine days.

That proved to be nearly impossible — unless we decided to sleep in our rental car along the way.

So I booked two nights in Wellington — we arrived the first night too late to do much but eat and sleep — and figured we could spend an entire day in this walkable cultural capital.

Wellington is a lot of things: It’s the capital city and government seat of New Zealand, it’s the second-most populous urban area with about 400,000 people (Auckland is the first), and it’s the southernmost city on North Island, right at the harbor that leads into the Cook Strait.

There’s also a lot to do in this small city, from visiting the $300 million (NZD) Museum of New Zealand Te Papa Tongarewa to sampling some of the city’s craft beers.

We stayed at an Airbnb in Hataitai, a small suburb with about 4,600 resident on the other side of Mount Victoria from the city. We found out that there are walking trails from Hataitai to the city — part of the Mount Victoria Loop — that would mean we could ditch the car (finally!) and just walk everywhere! The view of Hataitai from our rental. Along the walking trail from Hataitai to the city. The entire loop is a three-mile walk, taking about two hours. 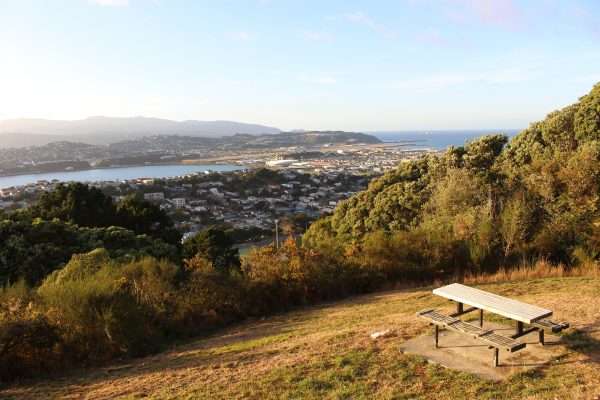 At one of the lookout spots on the trail. This one is atop Mount Alfred.

The Mount Victoria Loop is roughly three miles long and takes about two hours to complete. It’s not difficult, despite some hilly areas. And it’s heavily used by walkers (with or without dogs) and mountain bikers. It was cool to see people commute to the city this way. (I’d do that, too, if I lived here!)

It took us about an hour to walk from Hataitai to the city, following signposts and taking a brief side trip to an area used for the filming of “The Lords of the Rings” trilogy.

We popped out at the top of Majoribanks Street and made our way — downhill, thankfully — to Oriental Bay, where the museum is located.

Outside the Te Papa museum in Wellington. Inside the museum. I love seeing the bird collection, personally.

Te Papa, which loosely translate to, “our place,” opens at 10 a.m. daily. And it’s free, which is astounding considering the treasures inside. The History Collection features dresses and textiles, the oldest of which date back to the 16th century. The Pacific Collection boasts more than 13,000 historic and contemporary items from all over the Pacific. And there are about 70,000 specimen of New Zealand birds, the world’s largest specimen of the rare colossal squid, and various cultural exhibits on music, photographer, pop culture and Māori taonga (cultural treasures).

What’s not here anymore are two priceless historic Hawaiian ali‘i garments — a feathered cloak and helmet that Kalani‘ōpu‘u gave to Capt. James Cook in 1779. These were returned to the Bishop Museum in Honolulu earlier this month. (Read more about that here.)

One of the most amazing exhibits at the museum is “Gallipoli: The Scale of War,” a collaboration between Te Papa and the world-class artistry of the Weta Workshop. It tells the story through the eyes and words of eight ordinary New Zealanders during this pivotal battle during World War I. These giant sculptures — 2.4 times human size — took 24,000 hours to create. A quick chicken meat pie from the museum café and we were off!

Our next stop was the Wellington Botanic Garden, a leisurely — albeit uphill — 1.2-mile walk across the city. (You can also catch the Wellington Cable Car, which runs between Lambton Quay and the top of the garden.)

First established in 1868, this 62-acre garden covers the hillside between Thorndon and Kelburn near central Wellington. It features a protected native forest, conifers and various plant collections including an Australian garden, the Begonia House with lush tropical and temperate plants, a section on just camellias and a quaint herb garden. Strolling down the winding path in the botanic garden — also free to visit. Residents walk, bike and relax in this garden, located right in the city.

The herb garden — a nice place to sit and read.

My favorite part of the botanic garden was the Lady Norwood Rose Garden, a beautifully arranged garden with 110 beds of more than 3,000 roses set in a formal geometric design right outside the Picnic Café. (There’s even a trial garden on the western side, where new varieties are grown for three years before they’re included into the main garden.)

We lucked out, too, since the flowering season starts in November and ends in April. There are dozens of different varieties here, from modern to classic.

The garden is located just outside the Picnic Café. Inside the Begonia House with lush tropical and temperate plants including a variety of vibrant large blooming tuberous begonias, orchids, Hippeastrum, lotus and tropical lilies.

We left the garden the same way we came — by walking.

This time, though, we were on a search for food.

Cuba Street, one of the more bohemian areas of Wellington.

We decided to walk through the popular Cuba Street, the more bohemian areas of Wellington. It’s a pedestrian mall with cafés, op-shops, boutiques, art galleries and music shops. (“Mid Cuba,” near Vivian Street, was one the city’s red-light district, littered with prostitutes and strip bars. Alas, no more.)

No doubt, it’s a lively place, bustling with activity. But we were looking for something, well, quieter.

So we started heading back to Hataitai — at least in that direction — hoping to find something worth stopping for. We popped into several pubs and eateries, but nothing on the menu — or the ambiance — drew us in.

Then we hit Majoribanks Street and the start of our trek back to Hataitai. The pressure was on!

Luckily, we walked into the Tasting Room, a corner bar-restaurant that was slowly filling up with office workers grabbing pints of beer and sharing bowls of olives and feta.

Turns out, this place is known for its beef Wellington, a preparation of fillet steak coated with pâté and duxelles, which is then wrapped in puff pastry and baked. As silly as it sounds, I felt I had to have it here in Wellington. (I believe the dish has more to do with the Duke of Wellington than Wellington the city.) The beef Wellington at the Tasting Room.

And it was supreme, with bacon, mushroom duxelle and truffled lyonnaise potatoes — all for $36NZD. My husband called it, “A steak in a meat-pie situation.” Perfect description!

The full moon rising over Hataitai.

Our detour cost us some time — plus, we ate dessert — so we walked back along the trail to Hataitai by the light of the full moon.

It was a little freaky, I’m not going to lie, but there was something soothing about walking in the moonlight on this beautiful path.

I would probably bring a flashlight next time, though.